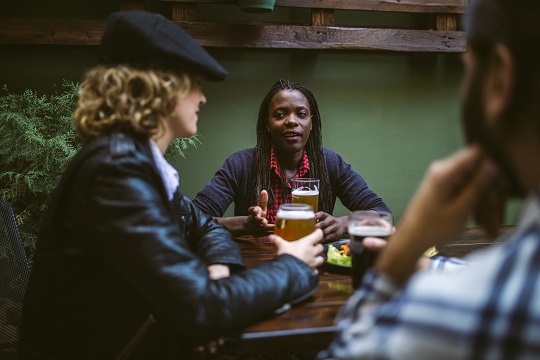 How many people do you know who head out Thursdays after work to get a jump on the weekend? What is the impact at your workplace? Most people don’t realize it, but off the job employee behavior does impact the workplace.

Impaired driving is a risk long after you consume alcohol because blood alcohol levels can remain elevated long after you stop drinking. (Friday morning hangover, anyone?)

Free Drug Impairment Training for Texas Employers (DITTE) explores the effects of alcohol on driving and workplace performance, and highlights costs and lifestyle impacts of a DWI-alcohol arrest. Benefits of preventative training for employers and employees also are outlined.

In each section of DITTE training, participants are directed to free resources designed to raise awareness of risks associated with impairment and promote safe behaviors. The training addresses seven categories of impairment:

Participants gain an understanding of the signs and symptoms of impairment, knowledge sure to serve all safety managers and employers well on the job. Make plans to attend an upcoming training session near you.

It’s a Matter of Time: Think you’re good to drive a few hours after you’ve had some drinks?

Learn/share: A Snapshot of Fatal Impaired Driving Crashes in Texas.

Tailgate Talk
Worth the Fight

In January, a cellphone video captured a road rage incident in Anaheim, CA, involving a man who jumped on a woman’s car and smashed her window. He later was arrested, booked on felony vandalism charges and held on $20,000 bail, according to a TV news report.

A few months earlier, a woman sitting in her vehicle on Interstate 35 provided running commentary as she filmed a road rage incident in Austin. Two men were yelling and kicking at each other.

The truth is road rage is not funny, nor is it all that out of the ordinary these days. In Texas, road rage was a contributing factor in 1,308 crashes in 2017, according to the Texas Department of Transportation. That’s more than three crashes every day.

In a Tailgate Talk with your team, play these videos to raise awareness of risks associated with aggressive driving behaviors.

Next, talk about reinforcing safe driving habits and steps that may help avoid creating a situation with another motorist:

Texas drivers may be fined up to $200 for each moving violation associated with aggressive driving and could spend time in jail.

Apply the football analogy as it relates to aggressive driving: The best offense is a solid defense – as in, defensive driving skills. Think safety first. Drive according to conditions. Eliminate distractions. Do not depend on that other guy or gal to look out for you or your loved ones.

Speeding is another aggressive driving behavior all of us see. TxDOT data indicates speed is a contributing factor in more than 380 crashes every day on state roads. Yes, you read that correctly – in Texas, 380 crashes daily are attributed to speeding. Crashes cost employers money whether they occur on or off the job.

Until a public stigma is attached to speeding, the best way to drive behavior change in the workplace is through ongoing educational efforts within your safety program. Driving too fast:

Many employers have enacted safe driving policies as a way to cut costs and protect employees. Let us help you learn what elements should be included in a policy at your workplace. When is the last time you reviewed your company policies?

Get a sample policy you can customize and use on your company’s letterhead. Discuss company policies with employees on a regular basis, not just when employees fit under the “new hire” category.

Creating a strong safety culture that includes strong policies designed to ensure safety is worth the fight.