Consider This a Call for Safety 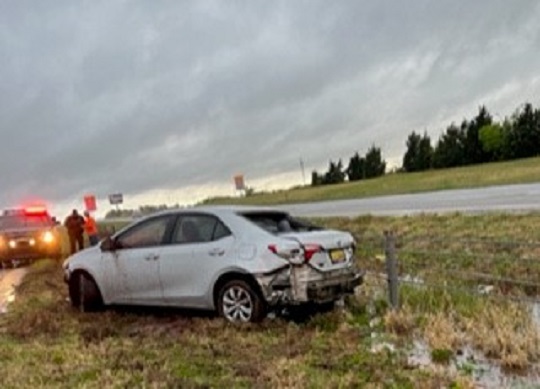 Do you drive to conditions? Do you move over for emergency vehicles?

I ask because I was aroused from sleep recently by words you never want to hear: “Mom, there has been a crash.”

I jumped out of bed, my heart pounding, as my daughter cried. Her boyfriend was driving home from work in heavy rain when a vehicle passed him at a high rate of speed. His tires lost grip of the road. Suddenly, he was hydroplaning. He crossed into the passing lane and ultimately into the median of the highway. The cable barrier prevented his car from spinning into oncoming traffic.

When we arrived on the scene, one of three responding highway patrol vehicles was still there, parked on the median behind the crashed vehicle with its lights on. I noticed that most of the other vehicles on the road slowed down and moved over. However, some were passing at high rates of speed, even though there was an emergency vehicle present and it was raining.

Feeling my vehicle shake as other vehicles passed gave me great pause and, in that moment, placed me in the shoes of an emergency responder. I thought, “This must be how they feel every time they pull off the side of the highway: fearful!”

Two things came to my mind. First, you can be trying to do everything right and still be involved in a crash because of someone else doing something wrong. Second, move-over laws are there for a reason.

So, let’s talk about No. 1, defensive driving.

Defensive driving can be defined as, “driving to save lives in spite of the conditions around you and the actions of others.” When we drive, we always need to have a plan and be able to recognize hazards, understand what defensive actions we might need to take and how to act accordingly.

Move-over laws require drivers to move over a lane or slow to a safe speed when approaching emergency vehicles, law enforcement vehicles, tow trucks or other utility and maintenance vehicles while they are stopped on the side of the road. In Texas, the law says drivers must slow down to at least 20 miles per hour below the posted limit.

Also, move over to keep workers safe whenever possible in work zones, including temporary work zones. Most work zone collisions are caused by driver inattention, traveling at unsafe speeds or following too closely behind others, all of which can be prevented.

Drivers deciding not to drive defensively or choosing not to move over or slow down put their own lives and the lives of others at risk. Make a commitment each time you get behind the wheel to be your best, follow the rules of the road and be a courteous driver. You don’t want to get a frightening call in the middle of the night.

– DeAnn Crane is a program manager with the National Safety Council