August 2019 Newsletter: A Minute of Safety Can Result in a Pile of Savings 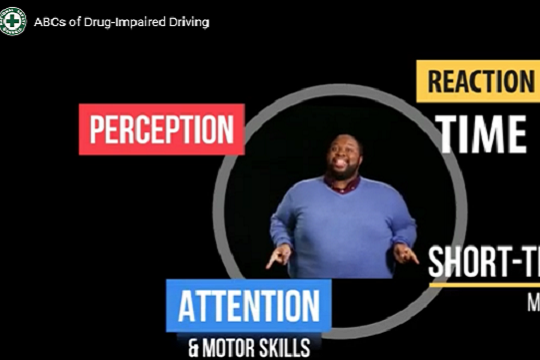 It can be difficult to find an hour to think about ways to be innovative or productive at work, but everyone can spare 60 seconds. Sixty seconds is all you need for a safety talk to highlight risks associated with drug-impaired driving.

Call it a safety minute. Our new 60-second safety video, ABCs of Drug-Impaired Driving, can be shared in an email blast, on social channels or video monitors at your workplace. The safety message here is a good one: Alcohol is not the only thing that can cause impaired driving.

Yes, it is true about one-third of fatal crashes across America continue to be linked to alcohol. Yes, when people think about impaired driving, they think about driving under the influence of alcohol or illicit drugs. But impairment also can be caused by medications, including prescription and over-the-counter drugs. Some can cause dizziness and fatigue.

In fact, more than half of drivers admitted to U.S. trauma centers following crashes tested positive for drugs other than alcohol, according to the U.S. National Library of Medicine, and one in four tested positive for marijuana use. Drugs can slow reaction time, cloud judgment, decrease hand-eye coordination and cause you to fall asleep at the wheel. Safety learned at work often is carried home.

Creating a culture of safety can begin in 60 seconds. What else can a safety pro do in that amount of time?

Everything is bigger in Texas, including seat belt use rates.

In Texas, 91% of people buckle up. That’s almost two percentage points above the national seat belt use rate (89.6%). But, because 9% do not buckle up, there still is room for improvement, particularly when comparing day and night seat belt use rates.

Seat belts are the least expensive and most effective way to lower employer costs related to traffic incidents involving employees and their family members. In 2017, the number of Texas drivers and front seat passengers not wearing seat belts at night increased by almost 40%, according to the Texas Department of Transportation, and 60% of no-seat belt fatalities (557 of 928) occurred at night.

Are your employees buckling up? Get the 2Seconds2Click toolkit developed by the Network of Employers for Traffic Safety and the National Highway Traffic Safety Administration. The kit includes everything you need to launch a workplace seat belt safety activity.

Employees who are in the habit of using a seat belt during work hours also are more likely to buckle up when they are off the clock. Seat belt safety is part of living the big life in Texas.

PrevPreviousAlcohol Not Always the Root Cause of Impairment
NextAugust 2019 Safety Coach: Make Safety Your Passion and Your PurposeNext